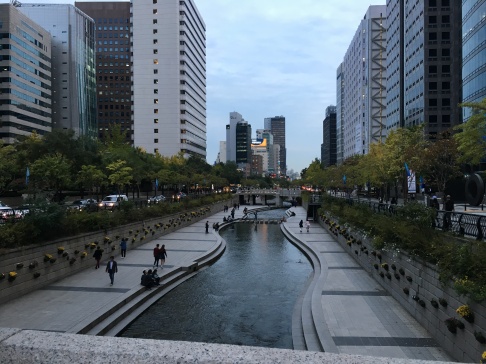 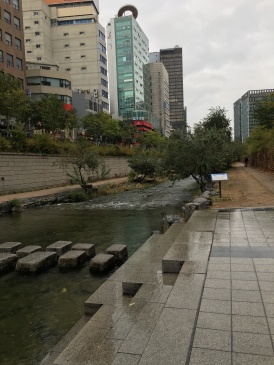 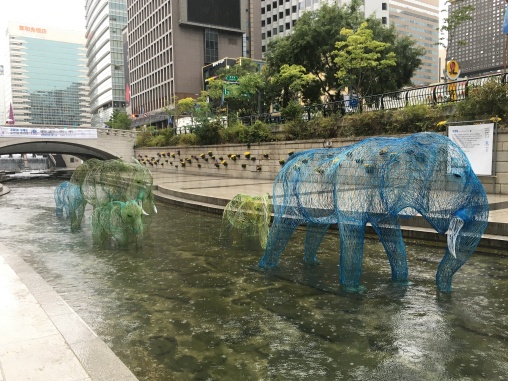 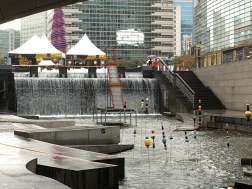 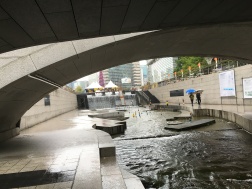 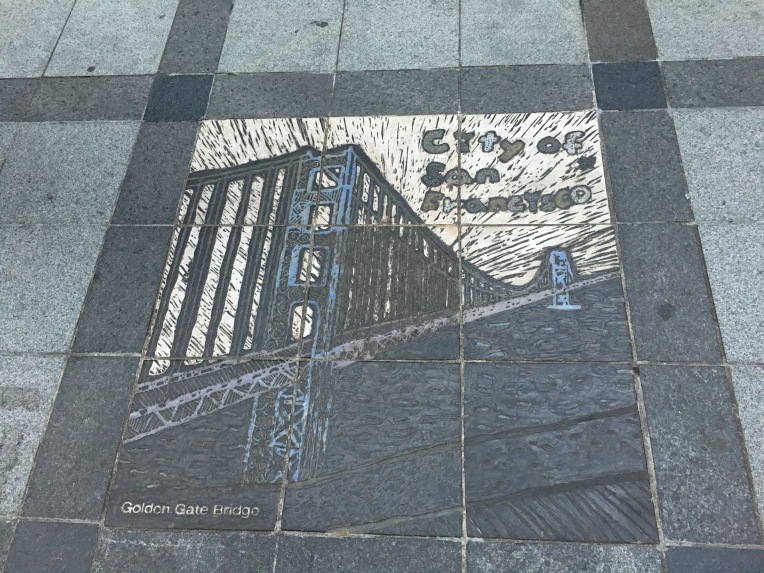 come to find out, Seoul is sister cities with SF.

As life chugs along and things shift around, Mother Earth too bears the changes of time. Sometimes the evidence of a time long past is easily seen and other times it is covered up over the shifts of many years, awaiting to be brought to light again in future times.

During a massive urban renewal project in Seoul, South Korea they unearthed Cheonggyecheon Stream that runs through downtown. What sequence of events must occur for a stream to be covered up? And was it a surprise when it was revealed? The city created a pedestrian walkway that runs alongside the stream for miles and showcases art both next to and within the water. Even on a rainy day, the promenade is a gathering place for the young and old alike. The steam is lined with folks exercising, sitting, visiting, and picnicking… what a wonderful gift to the community.

While there in the fall, I was able to run my entire 22 mile training run along the stream to where it meets the river without ever interacting with traffic. A feat I didn’t think possible in a city. It turned out to be my best run – the fastest time, the strongest finish, and one of the prettiest routes I ran in preparation for the marathon. 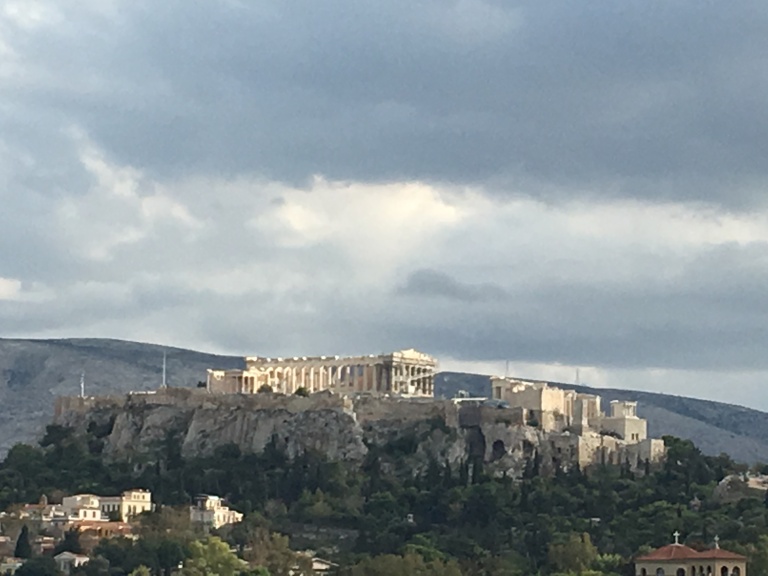 Places like the Acropolis always make me instantly think of Ms. Murphy. It was her classes that sparked my lifelong love affair with history: weaving art, stories of the past, and the very foundations of civilization together. She taught me that history isn’t static. It is the collective story of humanity, expressed in many ways – paintings, sculpture, architecture, poetry – a mark left on the world for generations after them to learn from. Blurring the lines of history and art, her eccentric teaching has had a profound impact on how I see the world and humanity’s shared past.

The Acropolis’ presence, perched high above Athens, looms large over the surrounding city. The origins of democracy and much of modern philosophy were debated here. I try to imagine what it was like to be a student of Socrates – his ideas and methods gravely revolutionary.

I am surprise to see the state of the ruins, second guessing the fidelity of my memory of hours spent watching slides click through the overhead projector tray displaying imagines of far away places in time. I feel a twinge of sadness at the deconstructed Parthenon, deliberately dismantled, a symptom of a past archeology restoration gone bad. I try to imagine those folks, back in the late 1940s, thinking they were doing the right thing. With the tools, technology, and knowledge they had at the time they probably were.

And then I remember how many times over the centuries this magnificent building has had to be restored – In the 1980s after an earthquake, in the 1680s when the Turkish gunpowder stores exploded, the 3rd century fire, its near complete destruction when the Persians sacked it in 479 B.C. Its massive marble construction refuses to be obliterated. 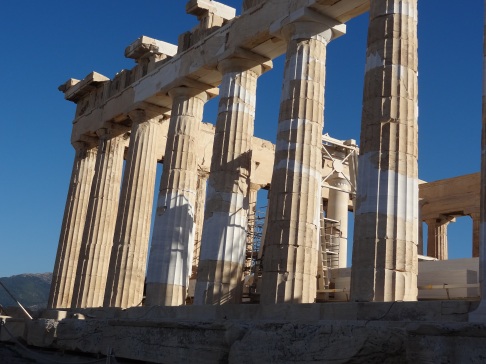 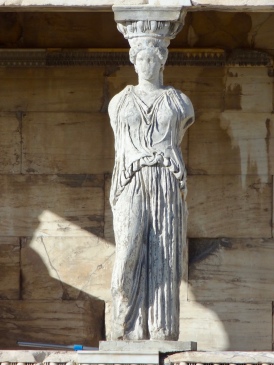 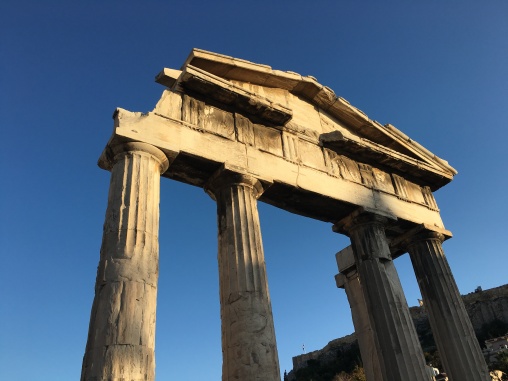 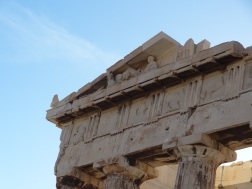 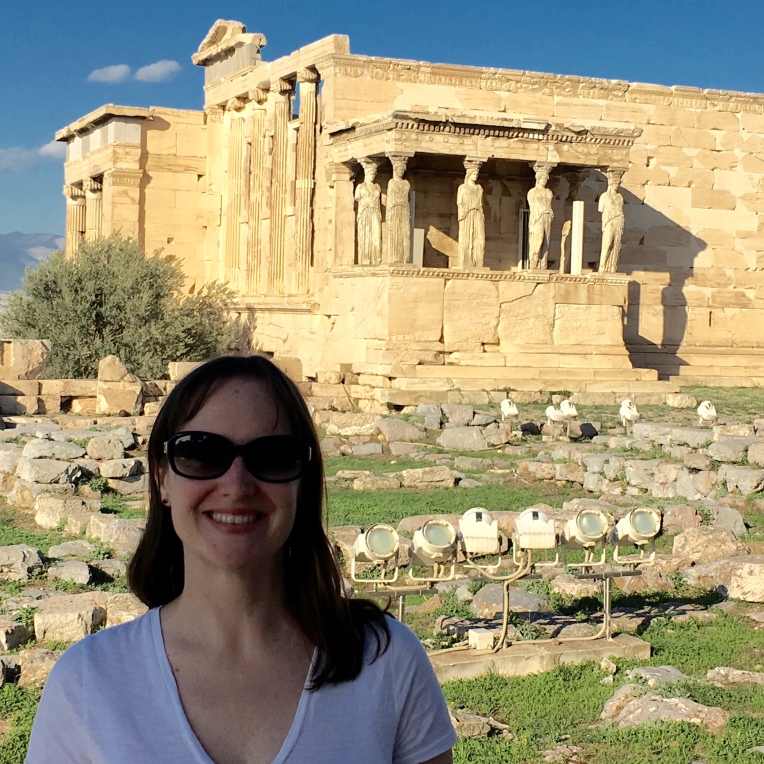 A short drive from Frankfurt, Germany is Frankenstein Castle. Holding a very different place in history, this castle also sparks the imagination. It is believed that a former inhabitant, an alchemist who stole bodies from the graveyard to conduct experiments on, was the inspiration for Mary Shelley’s novel.

What did the local community think of such a practice? Was it just a normal thing for alchemists to do? Were they scared or outraged? Looking at the past, it is easy to assign our beliefs and norms onto people of a different time. But we don’t really know. Even the writings of historians are distorted by the lens of the beliefs and norms of their lifetime.

Perched atop a hill, the view of the surrounding woods is every direction on this drizzly, foggy morning makes it easy to see how Mary’s imagination was sparked by the man she heard was living not too far from where she was visiting family for the summer. 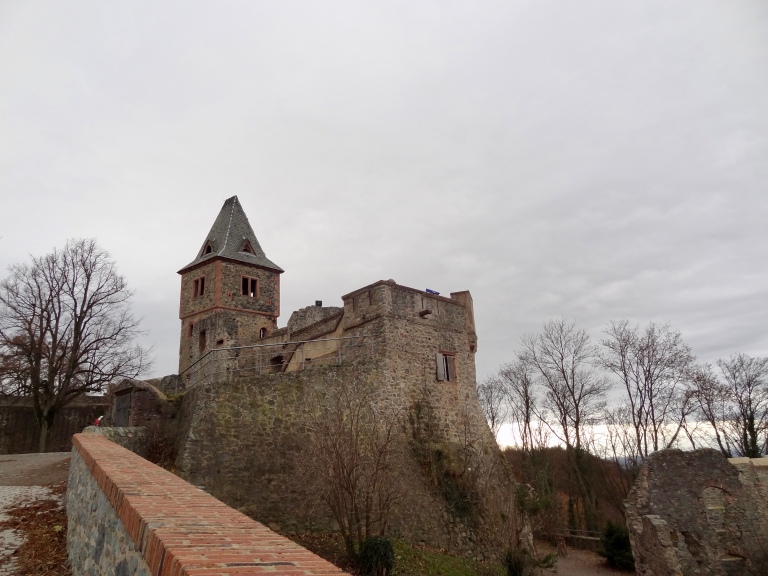