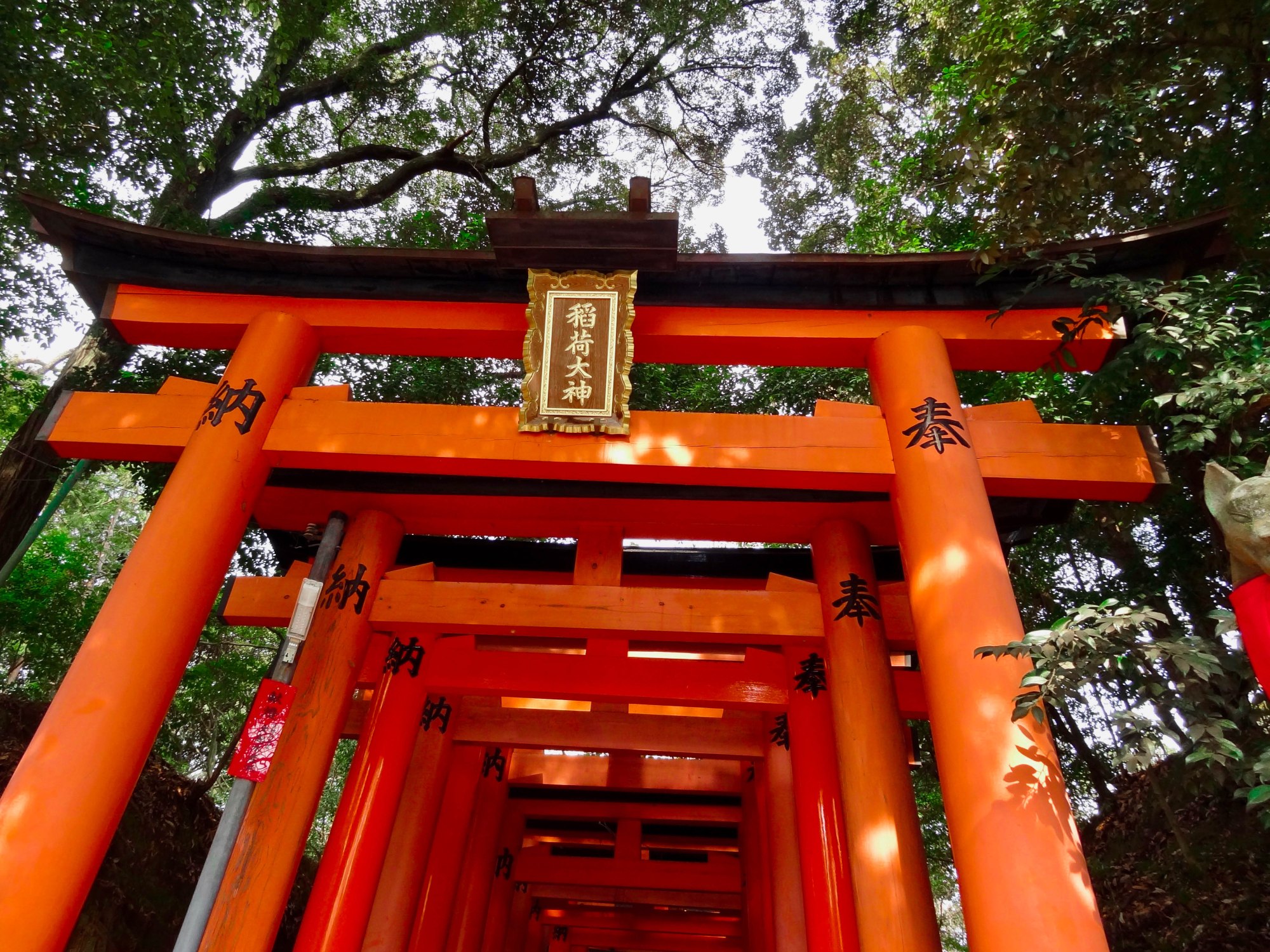 Kyoto is a beautiful city of temples and shrines. Two of its more famous ones were the focal point of my brief visit.

Dedicated to the god of rice, Fushimi Inari-taisha Shrine has graced the Inari mountainside on Kyoto’s edge at least as far back as 794. With thick forest paths, the hiking trail-esque setting is bespeckled with thousands of torii gates – each one a donation to the shrine. 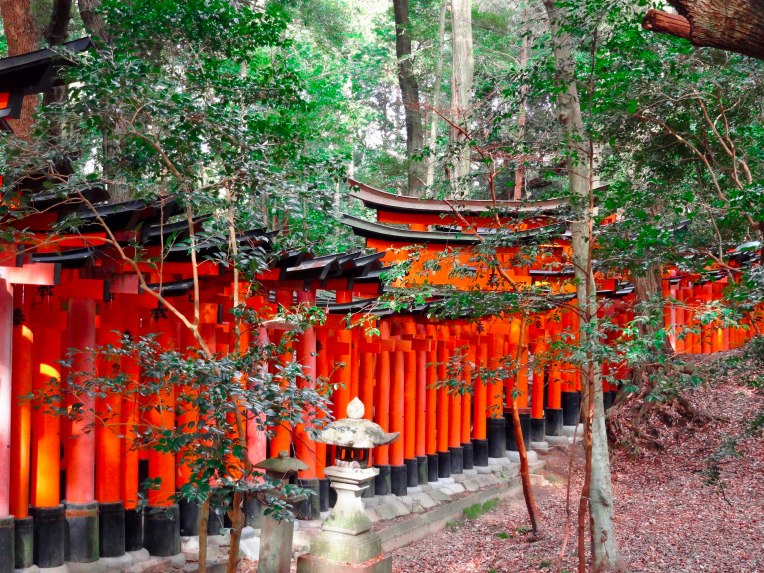 The rice god’s messenger, the fox, can be spotted standing guard along the path as you wind up the mountainside. The occasional glimpse of Kyoto visible in a break in the dense vegetation. The early afternoon heat makes for a slower pace for all of us. As we climb the switch backs, we grow closer without speaking to each other. The strain of the climb bonding us together. 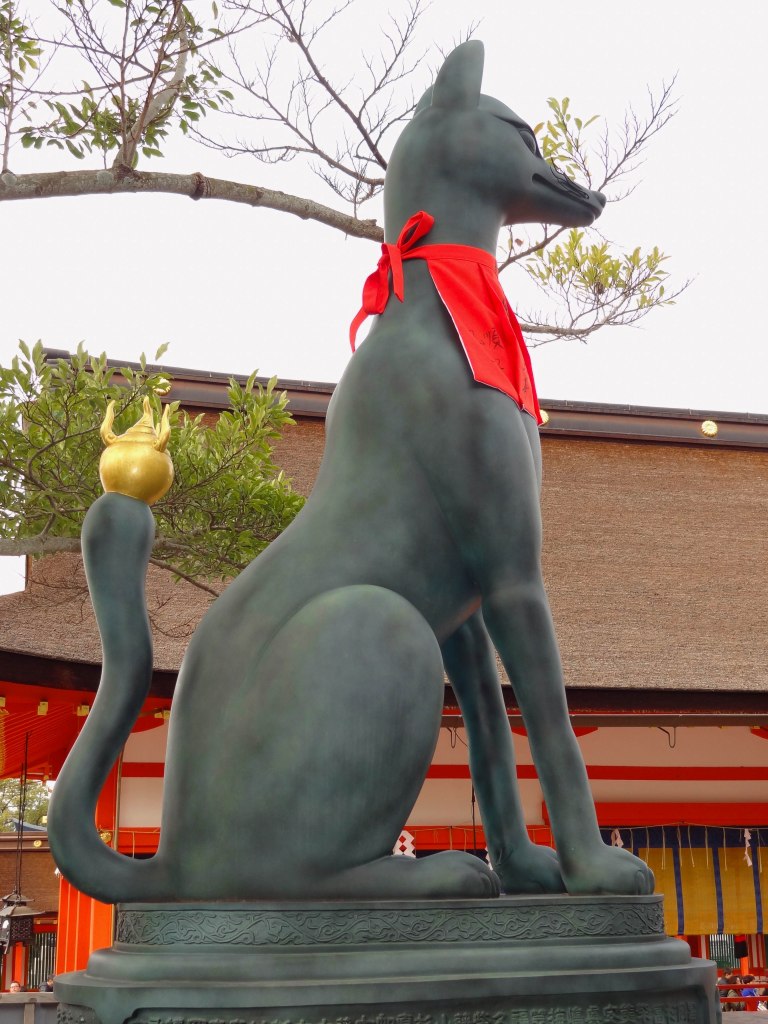 Early the following morning I step out the hotel door to start the subway-to-bus-to-long walk journey. Without thinking, I walk up to one of the taxis parked along the path leading to the street. Afraid I will butcher the name of the temple, I point at the map on my phone, the elderly man nods in response and opens the passenger door for me. I’ve learned to neither expect people to speak English nor expect them not to. There is usually an initial pause as we figure out how we will communicate. We ride in silence for many blocks under the gray sky until my taxi driver breaks the silence with perfect, slightly accented English. Asking what I have seen so far in his city, he begins pointing out landmarks along the way to Kinkaku-Ji (Golden Pavilion Temple). He has a warm demeanor and friendly smile.

The clouds darken in the sky the closer we get to the temple. Upon our arrival, as I fish around in my purse for his fare, he extracts a clear plastic umbrella from the trunk. In one motion he opens it, opens my car door, and places the light blue handle in my hand. “A gift for you; it will help you to enjoy the temple more.” I hadn’t even noticed the light drizzle that has accompanied the darkening of the sky.

In the 14th century this gold leafed building overlooking Kyoto-chi (Mirror Pond) was the villa of a shogun who lived in splendor amid the destitution prevalent in the day. Upon his death, his son converted it to a temple for Buddhist monks. Five and a half centuries later a monk in residence burned the temple down. The current structure is the identically rebuilt replica of the original building, with one exception: a phoenix was added to the roof – a reminder of the building’s rebirth from the flames. 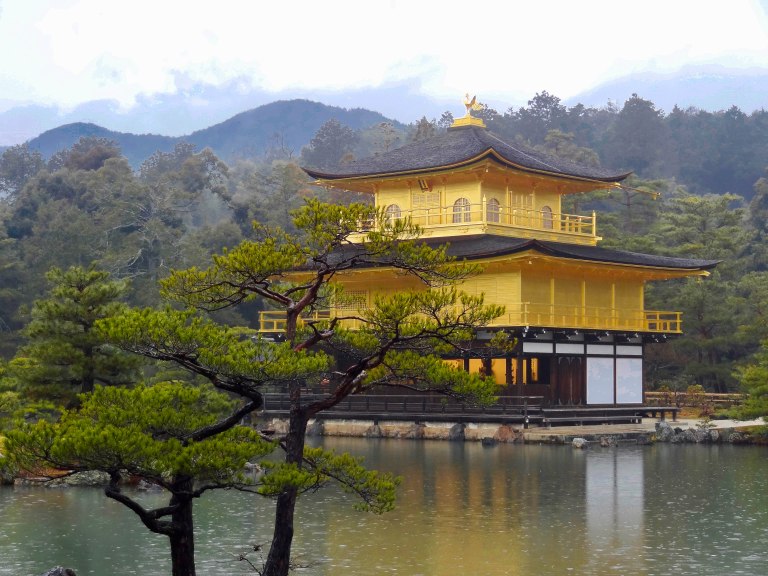 One thought on “Kyoto”